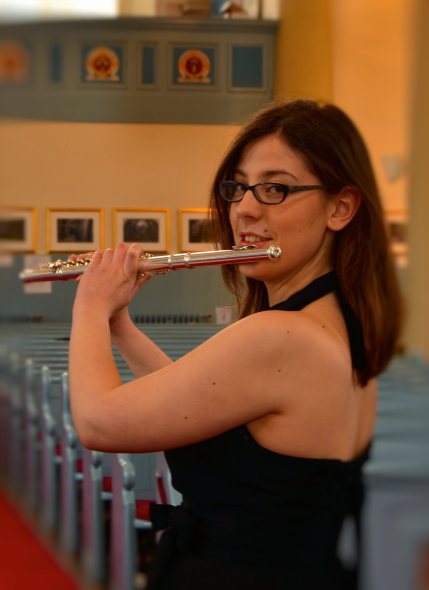 Equally at ease improvising with a trance DJ at music festivals as well as appearing onstage with some of the world’s most famous voices, Laura Cioffi is a freelance flautist and teacher. Currently based in the UK, she performs regularly with the Malta Philharmonic Orchestra and Scottish Opera Education Department, as well as various semi-professional orchestras around London. She is also a member of the award-winning Risatina Quintet, formed of fellow Trinity Laban graduates, and Duo Aulos, a contemporary Flute duo project with Clara Galea.

Laura had her soloist debut at the age of 19 with the Malta Philharmonic Orchestra, performing Chaminade’s Concertino in D Major. She also performed Vivaldi’s Concerto in C Major for Piccolo in November 2014 and Doppler’s Rigoletto-Fantasie as part of Duo Aulos in March 2015 with the Napier Chamber Orchestra. Laura has been recorded playing principal piccolo in a wind ensemble for a Naxos Label Recording. Thanks to her work within the contemporary music circle, Laura has performed a number of world premieres, written specifically for her, including for a Malta International Arts Festival Commission.

She studied with Anna Noakes, Christopher Green and Andrea Kuypers. Her studies have been made possible thanks to the generous support of Janatha Stubbs, Ian Tomlin Malta Music Trust, Malta Arts Scholarships Scheme and Malta Arts Fund.